Ray Reid is bringing his radio show, Blues Shack to Adelaide for one night only!

This is a weekly  radio show on radio station RPP FM which broadcasts out of the Mornington Peninsula, South East of Melbourne. Ray’s program is an all Australian blues program, you can read about it here: http://rppfm.com.au/show/blues-shack/. It airs every Monday, 7.30-9.30 Victorian time. Every week on his show Ray has an interview and live-to-air featuring an Australian act.

RPP FM broadcasts on two frequencies over a region that includes Mornington Peninsula, Frankston, the southern suburbs of Kingston, wider Melbourne including Geelong and the communities of Westernport and Port Phillip Bays. In all it broadcasts to about 350,000+ people. It also streams live on the internet. We will make the Adelaide edition of the show available online after the event.

Details of the Adelaide show:

​Acts that have released albums in the twelve month period to 30th September 2016 are encouraged to enter by the closing date of Wednesday 19th October.

We,The Adelaide Roots and Blues Association are deeply saddened by the passing of.
Paul "Pumpin’ Piano" Hay.
A man whose music, humour,
love of life and family, honesty,
moral values, sense of fun
and depth of soul
touched everyone lucky enough
to be in his company.
Much love to Mary and family." 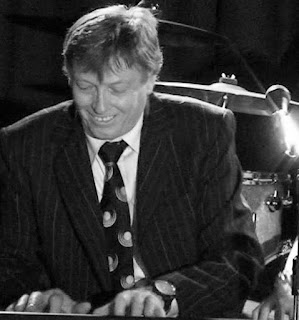 The family of Paul Hay extends an open invitation to attend Honorary drinks this Sunday to celebrate and reflect on the life of a man who meant so much to us all.
Time and Place: May 15, 2016. Hotel Metropolitan, 46 Grote St, Adelaide. In the Back Room. 4pm-6pm. 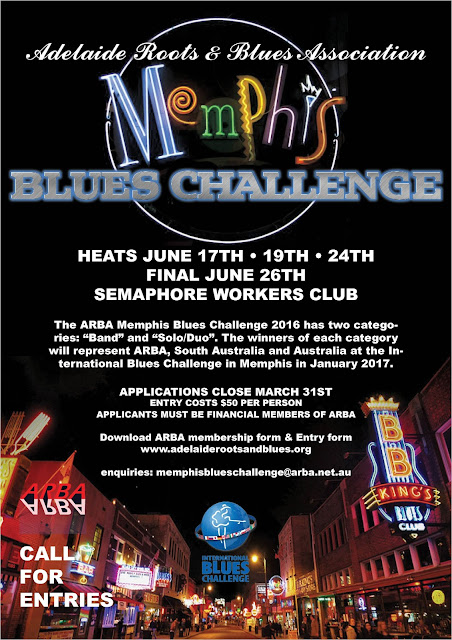 This is a gig to raise funds for the Klong Toey music program. A music school bringing positive change to at-risk kids living in a Bangkok slum. The musicians are donating their time and every cent collected goes to the school – no admin. Overheads whatsoever. A limited amount of “Playing For Change” merchandise will be available.

Read the latest on our south Aussie acts in Memphis...


Unfortunately but to to certainly no shame, Australia is out of the race after a hard fought Blues battle on Beale! Here are the results for semifinals and the finalists playing off at the Orpheum Memphis http://www.blues.org stay tune for the announcement of the winners of the 2016 IBC challenge. To all the contestants throughout the world and particularly our very own Lazy Eye and Mick Kidd & Dave Blight, thank you for taking your Blues to Memphis and giving it your very best on the world stage we applaud your efforts. Now get out there and soak it up!
Peter Allan 31/1/16 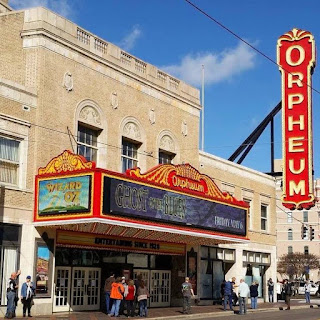 The Adelaide Roots and Blues Association congratulates all of the acts who made it through to the semi finals of the 2016 International Blues Challenge. We wish the best of luck to all of the competing acts, especially to Dreamboogie from the Melbourne Blues Appreciation Society, and The Matt Roberts Trio from The Sydney Blues Society. We know both acts will do Australia proud.
We are very proud of the performances of both of our competing acts, Lazy Eye and Mick Kidd with Dave Blight. They applied a completely professional approach to the competition and gave fine performances in both heats. They were very well received by the crowds here in Memphis and have made the most of the many opportunities afforded them by this amazing event.
We look forward to the Memphis Blues Challenge in Adelaide in June and the 2017 International Blues Challenge. Memphis you will see us again!
Full list of the semi finalists here: http://www.blues.org/wp-content/uploads/Semi-Finalists.pdf

I must unfortunately inform you that neither Lazy Eye nor Mick and myself have progressed through to the semi-finals of the IBC. I know for our part that Mick and I, as we went into our 1st heat, both felt a little flat after sitting quietly in the venue for 5.5 hours waiting our turn. That sort of thing is always a struggle but we went on and played quite well. Last night we went on early for round two and nailed it. We didn'catch Lazy Eye''s 1st heat but we were there last night to catch the best set I've seen them perform. As you can imagine the competition here is very strong but I can assure you all that Lazy Eye and Mick and I have held high the Adelaide Blues banner. We've played well, had great support and met some wonderful people over here in Memphis. This has been such an incredible adventure for all of us.....planet America is something else again!!!!
David Blight 29/1/16


Reports are they are having a ball and are on fire. Both acts have performed their showcase to an appreciative and sizeable Beale Street audience. Mick Kidd Dave Blight knocked em out at the Pig on Beale, Dave killing them with his Harp virtuosity. Lazy Eye performed at the International show case and although allotted a one hour bracket they played a full 90 minutes at the request of the organisers, and built a strong following. Reports are, they were all very impressed with the band and particularly Erica!
Note these were showcase performances and are not scored however it is a great networking opportunity and helps build a following for the heats.
Heat one performances for our acts at the International Blues Challenge -  Lazy Eye at Alfred's, 10.05 AM, Thursday. Mick Kidd and dave Blight at the 12 Bar, 3.00 PM, Thursday, Adelaide time.
(Posted 28th Jan. 2016) 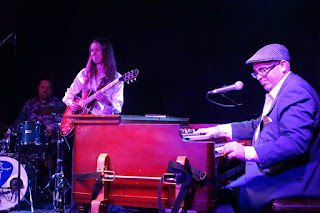 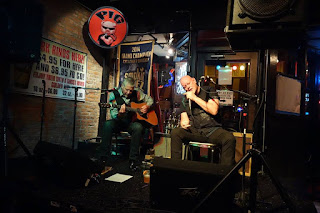 South Australian winners of the 2015 ARBA Memphis Blues Challenge, Lazy Eye and Mick Kidd & Dave Blight are heading to Memphis to represent us at the International Blues Challenge.
Their Journey together, begins 8.00 am Monday 25th January at  the Adelaide Airport.

The gang fly out on a Qantas bird from Adelaide domestic at 9.30 am, off to Sydney then through to Memphis (via Dallas).

On Wednesday 27th, Adelaide time Both Lazy Eye and  Mick Kidd & Dave Blight will perform during The International Showcase on Beale St.
Mick Kidd & Dave Blight will showcase at The Pig On Beale, 167 Beale St, Memphis, Tennessee.
"Our first gig on American soil and part of the "International Showcase" at the Memphis Blues Challenge - Plus it's my Birthday - I'm one lucky bloke!"

As a part of the “Asia Pacific Blues Invasion” showcase, Lazy Eye will be the nominated South Australian act, and will perform a 30 minute set at B.B. Kings Blues Club on Beale St, at 12.45 pm on  January 29th.  Other acts performing at B.B. Kings will be fellow Australian “band" entrants, Zach Linton Band,  Dream Boogie and Matt Roberts Trio as well as Blues Asia Networks representative,  Lampoon Alley of the Philippines.
( Posted 23rd. Jan 2016)

The “Christmas Blues Brews and BBQ” event to be held at St Luke’s on the 5th of December will now be a fundraiser for this bushfire appeal. All profits from the money taken on the door at this event as well as the proceeds generated from a gala auction to be conducted on the night, will go to the appeal.

ARBA President Mick Young said “Given the horrific and devastating nature of this natural disaster, we felt compelled to try and provide some assistance to those affected.  It is really pleasing to have St Luke’s come on-board by waiving their hall hire fee and agreeing to provide assistance on the night. We hope that a large crowd will join us on the evening and have a great time whilst supporting this worthy cause.”

The 2015 CHAIN Blues Music Awards Nominations
Although Melbourne artists share the bulk of the finalist nominations for the 2015 Australian Blues Music Awards announced this morning, Adelaide-based newcomers, Lazy Eye, are close by with two nominations in Song of the Year, and Duo or Group of the Year. Also Keith Hall & Pat Dow are nominated in the New Talent of the Year category  with their song, Sugar Cooking off the Love Divine Album.

Greg Dodd and his band The Hoodoo Men lead the list with nominations in four categories, with Russell Morris and John McNamara each picking up three nominations.
Previous winners, Queensland duo Hat Fitz & Cara Robinson, have also picked up nominations in three categories with nods in Album of The Year, Duo or Group of the Year and Female Vocalist of the Year.

The winners will be announced on Saturday 7th February as part of the Australian Blues Music Festival in Goulburn.

Finalists in all categories are: 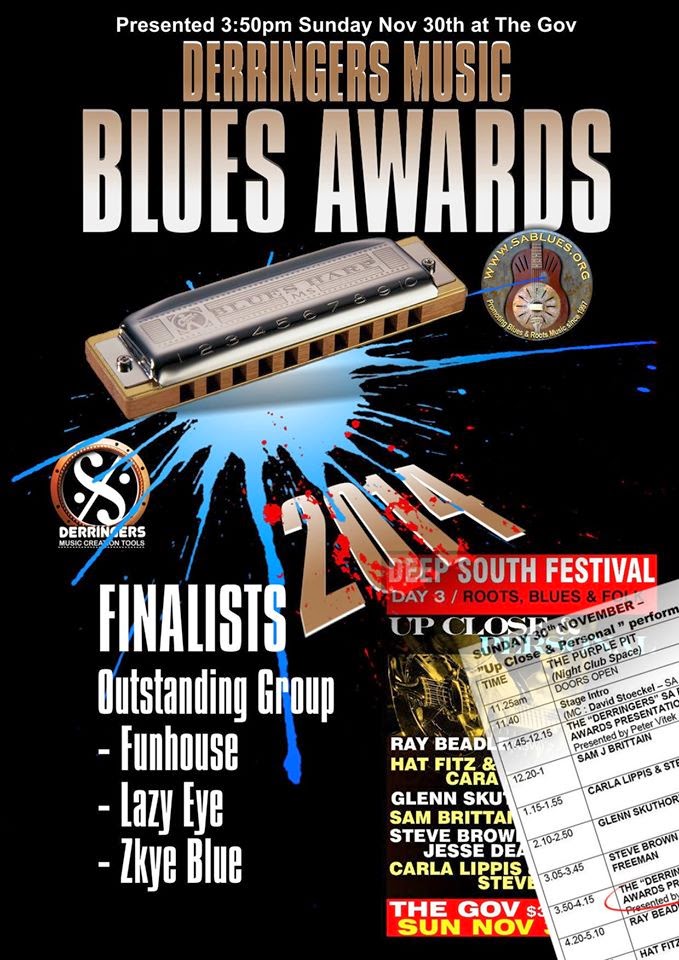 Adelaide Hammond Organ trio, Lazy Eye,  has taken out the Best Blues Artist category for the 2014 at the Fowlers Live Music Awards. The awards, run in conjunction with Music SA, aim to celebrate the great diversity of original live music made in South Australia.
Describing the bands style as soul drenched blues, co-founder Evan Whetter was stunned when told they had won the award. Whetter said “We are all ecstatic. We're… humbled by this… given the breadth and scope of talent in South Australia”.
The band’s debut album Move Me was named album of the year at the 2013 SA Blues & Roots Awards and their current release House Of Trouble made it to Number 3 on the Australian Blues & Roots Airplay Charts. Festival appearances at the Australian Blues Music Festival and the Gympie Music Muster have anchored continual touring throughout 2013/14 and with more festivals about to be announced, 2015 will be just as busy.
Lazy Eye is Whetter, (Vocals, Hammond organ & Harmonica), Erica Graf (Guitar) & Mario Marino (Drums). www.lazyeyeband.com
For interviews:
evan@lazyeyeband.com
0412 287 698


The 36th International Blues Music Awards will be held on May 7, 2015 in Memphis TN.
We are working toward registration and running the Adelaide heats for next years 37th MIB Challenge

Read all about the Memphis International Blues Challenge Here
http://www.blues.org/international-blues-challenge/ 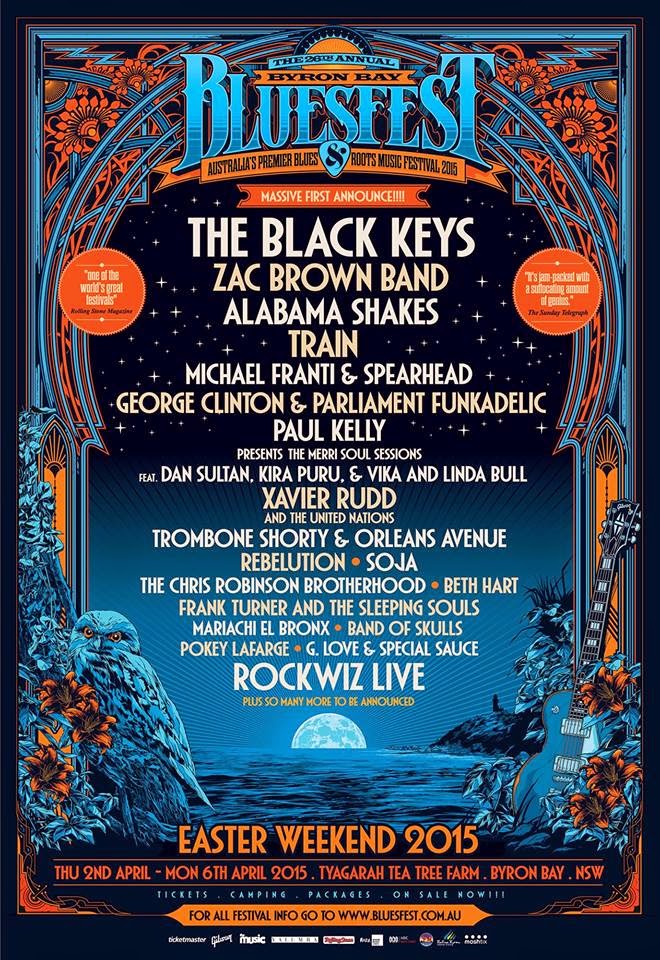 We're thrilled to release our first round of incredible artists


to be rolled out in the lead up to Bluesfest Byron Bay 2015! Bluesfest Facebook

In November 2013, Thinker in Residence and WOMAD co-founder Martin Elbourne (AKA MElbourne) compiled a report on the live music future of Adelaide. The report detailed 49 recommendations to improve and build the live music culture in South Australia’s capital city.
Eight months on, the City of Adelaide has taken the 23 recommendations relevant to local government and created their Live Music Action Plan. The full plan can be accessed in the City Culture & Community Services Committee’s here.

International Blues Music Day brings together communities, schools, artists, historians, academics, and blues enthusiasts all over the world to celebrate and learn about blues and its roots, future and impact; raise awareness of the need for intercultural dialogue and mutual understanding; and reinforce international cooperation and communication. Each year on the first Saturday of August, this internationally practiced art form is recognized for promoting peace, dialogue among cultures, diversity, and respect for human rights and human dignity, eradicating discrimination, promoting freedom of expression, fostering gender equality, and reinforcing the role of youth for social change. International Blues Music Day is the culmination of the Blues Festival Season which draws public attention to Blues and its extraordinary heritage.

For more Blues and Roots news check out: http://sablues.org/news1.htm